Aphids on an Artichoke Stem

So after battling the ants and aphids for the past 4 months, I’ve finally lost the battle. My poor little artichoke just can’t seem to fight them anymore.  Despite laying down the Terro ant baits (which have helped), the ants are still crawling all over the artichoke day and night, bringing with them aphid eggs and facilitating the population explosion.

Once a plant has crossed a line, it’s hard to bring it back.  I’m going to start over with  a new artichoke and see what happens.  This time I will be vigilant to make sure that it is better nurtured, spraying it with worm tea every week or so, fertilizing it once per month and checking it several days per week  to make sure the ants haven’t moved in.   I will also continue to set out the Terro baits to get the ant population under control.

Ants move in when a plant is in  a weakened state. This artichoke has been in this pot for over a year and it was attacked by aphids last year – so I think it has been in a compromised state for a long time, making the battle with the ants and aphids more difficult.  So I’m saying farewell to my little artichoke plant and sending it to the city compost bin.   Hopefully, I’ll have better luck with the new artichoke. After all, it’s my two daughters’ favorite vegetable and at $3.00 – $4.00 per head, I’d rather grow my own guaranteed organic ones. 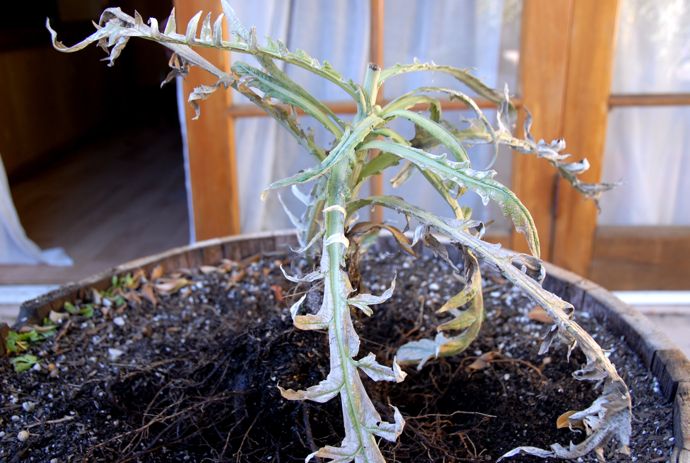 I have found an organic insect control that works on all insects with an exoskeleton, such as ants, cockroaches, and earwigs. It is a fine white powder called diatomaceous earth. In its food grade form it is even beneficial to animals externally to kill fleas and internally to kill tape worms. Diatoms are a single celled algae that leave behind a silica shell. In large quantities these microscopic shells form diatomaceous earth. The shells interfere with the joints of insects to disable and kill them. They do no harm to animals. They live in most bodies of water on the planet and give off oxygen. Nature has provided a perfect insect control. Diatomaceous earth is readily available.

Yes, diatomaceous earth is a great solution. We will begin carrying it in the UrbanFig shop this coming week. Thanks for your comment.

I have been treating my artichokes by the same method as my roses. I mix liquid dish detergent with water, put it in a spray bottle and apply it. It seems to kill the aphids. The ants are not fond of it either. So far so good!

What ratio of water to soap do you use? Thanks for sharing.

The ratio of the water to soap should be 1 tablespoon to a gallon of water. At least, that is the ratio we have been using (passed on by my mother-in-law).

I also found a solution to the aphid on artichoke problem using dish soap and water, but the recipe I found calls for adding vegetable oil proportionately.