In my last post, Battling Ants & Aphids Part I, an army of ants harvesting aphids had taken over my tomatoes and my artichoke.  I set out Terro Ant Baits to see if they would keep the ants at bay.

Ants crawling on my artichoke.

Well, the ants (and the aphids) are still around.  The Terro Baits can take up to three months to work, time that my tomatoes don’t have. My tomatoes are at the end of their season anyway, so I’ve decided to pull them out and start over.  I set aside the green tomatoes to make Fried Green Tomatoes.

Sometimes pulling out your veggies that aren’t doing well feels really good.  It’s almost like getting rid of stuff in your garage that you don’t need anymore.  Once I removed the tomatoes, I added a few handfuls of Dr. Earth Start Up fertilizer, a few handfuls of worm castings and some water. I’ll let the soil sit for a few days to give it time to rejuvenate.  It’s nice to make space for new veggies.  I’ll plant some beans, lettuces, and Brussels sprout in that space. 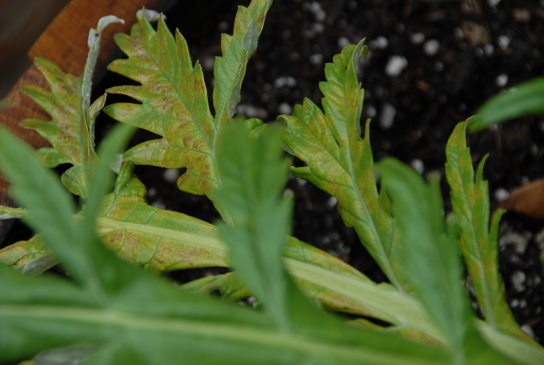 A discolored artichoke leaf from the aphids.

With the artichoke plant, I need to keep it going.  Artichokes are perennials (they will last for years and produce artichokes a few times a year).  I am going to continue to keep the Terro Baits out while spraying inside the artichoke with Pyola to kill the aphids every ten days or so. Pyola is a powerful organic pesticide, so I’ll also spray worm tea on the leaves to strengthen the plant every few weeks.  Hopefully this slow and steady method will keep my artichoke alive.  We’ve harvested one artichoke so far (and it was delicious) and have three baby ones growing. It is certainly a determined plant despite its battle with the aphids.

The most important guideline in gardening is to embrace “failure.” As the Latin maxim goes, Discimus Agere Agendo, we learn to do by doing.  The only way to learn how to garden is to do it. The wonderful thing about gardening is that you can always start over and that feels great.