How to Grow Cinnamon 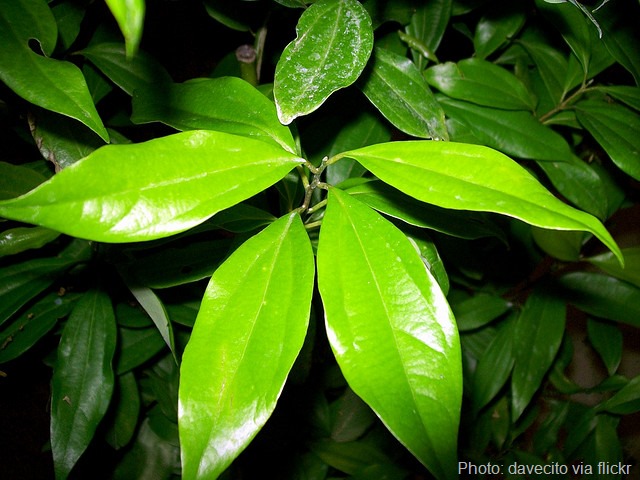 Cinnamon is exotic, spicy and flavorful, but did you know that the culinary spice comes from a tree? It may surprise you to learn that you can learn how to grow cinnamon at home no matter where you live. In fact, growing a cinnamon tree is easier than you might think!

The first and most important thing to know when growing cinnamon is that you can easily overwater them. Cinnamon tree roots prefer to stay on the dry side, so you will want to water them less often than you do other plants to keep the soil somewhat dry. The roots are susceptible to root rot otherwise.

To grow cinnamon trees in a pot, start with a seedling or cutting and good well drained potting mix that is on the acidic side. I like a 50/50 mix of perlite and sphagnum moss. You will want a spot that has lots of good sunlight, whether full or partial sun is largely up to you. Depending on the container size you choose, your cinnamon tree can get anywhere from 3 to 8 feet tall, and can be pruned to maintain smaller sizes as desired.

Resist the urge to baby your cinnamon tree. These plants will do quite well with a minimum of involvement from you. If you like, fertilize with a liquid fertilizer once a month during the active growing season, but even this isn’t necessary. You can prune the plant at any time as desired for shape and size, or for harvesting.

Harvesting cinnamon bark requires that you cut the branches or stems from the plant itself. Score the bark without cutting all the way through the bark. Once you have done this a time or two you will know exactly how deep to go to loosen the cinnamon bark.

Whether your cinnamon tree is indoors or out, be sure to maintain a temperature no lower than 60 degrees at all times.

Where can we buy cinnamon tree here in US and/or California PLEASE?

Logee’s has cinnamon trees in a reasonable size for about $50. My husband just got me one from them for our anniversary. The address is http://www.logees.com

I found mine at Lowes.

Where can I buy seeds ?

how can I get Ceylon Cinnamon seeds to grow my own trees?

You can but it’s best to start from a seedling

Where can I get a cinnamon plant?

I’ve never purchased from them but it looks like they have a good selection. Happy gardening!

where can you purchase a seedling or a start from the cinnamon tree? I live in Ohio and have never seen anywhere to purchase a start. I appreciate your response.

where can one get a start of the Cinnamon Tree? Thanks for your response

where do you purchase a seedling? How fast do they grow?

Where do I get cinnamon trees?

You can purchase a tree here: http://www.fast-growing-trees.com/Cinnamon-Tree.htm

I live in Canada, where do |I get a cinnamon seedling? I would love to try this

You can find seedlings here:
http://www.fast-growing-trees.com/Cinnamon-Tree.htm

Where can I get the seeds of cinnamon ?

You can purchase the plants here: http://www.fast-growing-trees.com/Cinnamon-Tree.htm

Where do you find cinnamon seedlings? I’m in Ohio so won’t be able to start planting until warm weather. Have no space indoors to do this. Thank you in advance

Where can I buy a cinnamon cutting? Would live to grow my own cinnamon ! ! Louise

They sell them when they are in season.

Where can I find a cutting from a cinnamon tree that I can try to grow?

How to go about getting cuttings to start a tree of cinnamon. please let me know where to get seeds or the cinnamon tree. i really want to know so i can grow one indoors.

Can u start a tree from cinnamon stick

Today I just bought a cinnamon plant and i was just wondering how to propagate cinnamon?

You can propagate from a cutting – choose the healthiest one and stick it in a small jar of water in the sun. Once roots appear, plant it. Good luck!

Fig trees are easy to grow and fruit quickly

My cinnamon tree is blossoming for the first time
Will have seed in due course
torandy321@hotmail.com-if your interested