Is Homegrown Food a New Currency? 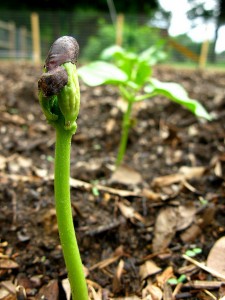 In his recent viral TEDx talk, South Central LA gardener, Ron Finley, made a simple yet profound observation: Growing your own food is like printing your own money. Could anything be more truthful?

When we think about our spring and summer gardens, it’s typically the enticing idea of the freshest tasting food that gets us digging in the dirt while it’s still cold out. The thought of another supermarket tomato sending shivers down your spine as you weed and turn your soil, waiting for that fruitful day when your tongue tastes the first bite of pure deliciousness.

Granted, deliciousness is its own reward, and it’s as good a reason as any to commit yourself to a garden. Anything to get you away from the television and outside in the sun, right? Besides, if you’re going to spend good water on maintaining a yard, the least it can do is yield you more than manicured grass (unless you have a grazing cow or goat who likes to eat that grass).

But how often have we thought about our most modest gardens as actual money? For most of us, we’ll still have to head to the supermarket or farmers market for kitchen staples. Our fresh garden grown tomatoes and peppers are savored alongside our purchased fare like treasured gems. Which, of course, they are.

Like Finley so blatantly noted, growing our own food has the potential to be so much more than that, though. Particularly in the “food deserts” and our nation’s sprawling lower income areas like South Los Angeles where supermarkets are nonexistent. The lack of fresh fruits and vegetables—let along fresh, organic options—define food deserts. These areas plague our country with a plethora of “edible” options. The thing is, they’re mostly deep-fried fast foods or convenience marts offering processed junk food with little nutritional value. And where fresh, healthier offerings may be found, they’re often far more expensive than a Big Mac or a bag of Doritos.

Not only does growing our own food taste better, but it can offset our food costs, too. This is of value to people of South Central LA as well as those living in Beverly Hills. Money is money, after all. And the better we can manage where and what we spend it on is a concept few will argue with.

Growing our own food also provides us an opportunity to become part of our community in healthy ways. Finley turned the green strip of grass between the street and sidewalk in front of his house into an edible delight for the neighborhood to enjoy. Virtually every major city has community garden plots available to those have no yard of their own. Food swapping, sharing and potlucks provide a tasty way to trade your freshly grown eats with others. And you share more than just food, too. There are stories, seeds, recipes and connections you rarely find in the supermarket aisle.

If there’s one golden truth in this universe, it’s that we are what we eat. Literally. Food becomes us in the most intimate way possible. Taking ownership of that is self-nurturing, self-reliant and positively rewarding—even if that means you can only grow a windowsill pot of basil or mint.

Is homegrown food the new currency? No…it’s the oldest one on the planet. We’ve just forgotten its value.