The Underdog Who Invented the Mortgage Lifter Tomato 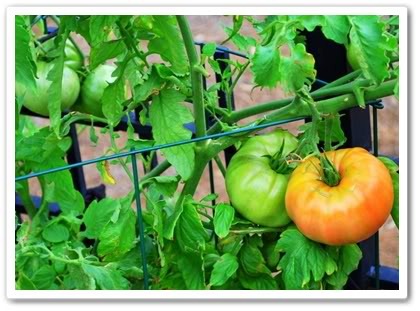 People often ask why I have such an affinity for heirloom tomatoes – and heirloom seeds in general. The answer is simple, if multi-layered. One of the biggest reasons is the incredible, often unbelievable history that comes along with heirloom plants like Radiator Charlie’s Mortgage Lifter Tomato, my favorite tomato plant.

In the 1930s an unassuming man from West Virginia named Marshall Cletus (M.C.) Byles without any formal education opened a radiator repair shop in the most obvious place he could think of – the foot of a steep hill where trucks were constantly breaking down because of the steep grade. This wise business move earned him the nickname “Radiator Charlie” to all who knew him. 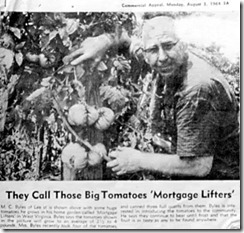 For no particular reason other than personal interest, Charlie one day decided that he wanted to breed what he thought would be be perfect tomato. He started with four of the biggest and best varieties he knew of at the time including the German Johnson and Beefsteak as well as specimens from Italy and England and meticulously cross-pollinated them until he achieved tomato perfection. Charlie went on to sell his precious seedlings for $1.00 each during the Depression, but people were willing to pay the price because these were no ordinary tomatoes, each one could grow as large as 4 pounds!

Within 6 years, M.C. Byles had paid off the mortgage on his $6,000 home and the tale of Radiator Charlie’s Mortgage Lifter Tomato was born. I’m a sucker for a good story and this one is both quirky and interesting, Perhaps most interesting is the fact that Byles never attempted to breed any other plant before or after.

Byles passed away at  the age of 97, but his legacy lives on in gardens all over the world.